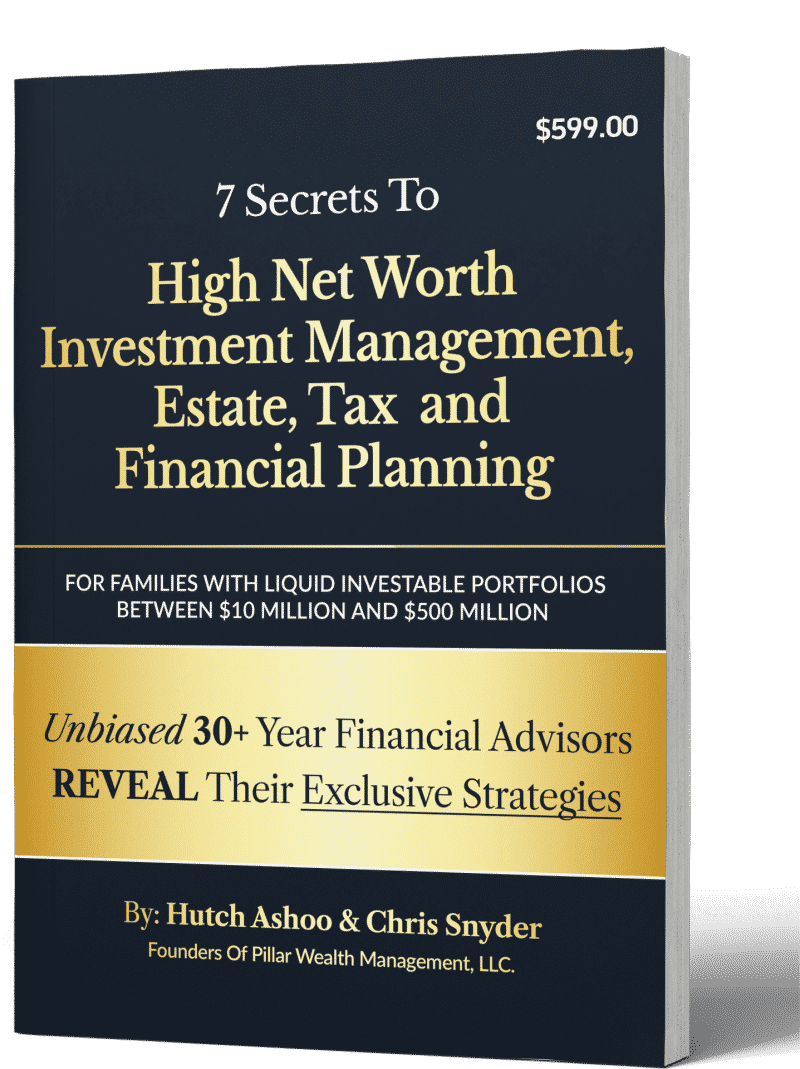 STRATEGIES FOR FAMILIES WORTH $5 MILLION TO $500 MILLION

The insights you’ll discover from our published book will help you integrate a variety of wealth management tools with financial planning, providing guidance for your future security alongside complex financial strategies, so your human and financial capital will both flourish.

Clients frequently share with us how the knowledge gained from this book helped provide them tremendous clarity, shattering industry-pitched ideologies, while offering insight and direction in making such important financial decisions.

Hutch Ashoo and Christopher Snyder are the expert founders of independent, fee-only, and fiduciary wealth management firm Pillar Wealth Management. If you would like to speak with them or simply ask any questions about how custom and trusted wealth management advice is offered to high-net-worth individuals with $5 million to $500 million in investible assets, then feel free to start a conversation.

Net Investable Assets: What are they?

These are some of the investable assets that are categorized as liquid assets. On the other hand, there are also solid assets such as homes, cars, real estate investments, jewelry, and so forth.

Based on the above explanations, you can say that investable assets include everything you have without having to sell any of your properties. These are the appropriate indicator for your wealth. They can be helpful at some point if you need to know quickly the cash value of your assets to cover unexpected needs.

Why are investable assets important?

In addition, these financial assets can be a standard for lenders or banks to determine if a person is a good applicant for a new loan or debt.

Now, you know that investable assets are composed of near-liquid and liquid assets. You can add them up and then subtract any consumer debt, such as a loan or credit card debt. However, you should not include your mortgage since this is considered an expense, not a debt.

In calculating wealth, some people may use net worth, and others use investable assets. The problem with using net worth is it fluctuates a lot, corresponding with the fluctuation of your solid assets on the market. On the other side, investable assets are more stable since they are not composed of solid assets. Although they also fluctuate depending on the amount of debt you have and market circumstances, but the change is minimal.

Suppose that you are planning to work with a financial advisor or looking to buy new property. Then, it would be best if you calculated the value of your investable assets to give you a better insight into your worth and manage any of your investments for a longer time. In fact, when you come to wealth management companies, there is a minimum account investment. Therefore, you should know the value of your investable assets so you can easily make your decision to work with a suitable wealth management firm.

As a high net worth individual, you can start managing your investable assets by regularly calculating their value, something you can do by yourself without much effort. Also, you can liquidate your assets under any circumstances, especially when an emergency arises. It will give you an idea of your current worth and still be able to keep some of your property.

Suppose that you want to know about more comprehensive methods for managing your assets. We recommend reading our guide on how to find a financial advisor for managing over $10 million in liquid assets.

In addition, you need to understand that there are other aspects that can affect the number of investable assets that you have. Such as salary, age, cost of living, and lifestyle. Correspondingly, a certain life stage can shape your financial goals because you want to make the most out of your investable assets. For instance, someone who has been a long time in their career has different financial objectives from someone who is a recent graduate.

Why Ultra-Affluent Families Lose So Much Money

Imagine retiring in October 2007 and entrusting your $30 million with a money manager from Wall Street or a Big Bank financial advisor. Based on the firms’ pre-determined cookie-cutter investing, this manager placed your retirement dollars in what amounted to a 60/40 model! That is 60% Equities and 40% Bonds. Before we get too much deeper into this article, we’d highly recommend you request this in-depth free book for investors looking to entrust between $10 million and $500 million to an unbiased advisor who will not over-expose your portfolio to undue risks.

Now imagine the market collapse and eventually bottoming out in March of 2009. You would have lost about $10 million, excluding the withdrawals you would have made to sustain your lifestyle. In October 2007, your mindset was that you would never spend all $30 million you worked so hard to save, and now 5 months later, you are thinking, I only have $20 million left, and will my money expire before I do?

This collapse was very similar to what recently happened with Covid-19.

We were also managing our clients’ retirement when the dotcom crash hit in 2000. However, one of the big differences between that market crash and the Coronavirus crash was the bond market. In 2000, bonds were paying nearly 7%. Today, bond interest rates are at all-time lows.

Why does this matter? Because in 2000, if you had a 60/40 asset allocation – you weathered the storm better since those high bond yields helped somewhat compensate for the battering taken by stocks.

Today, in the midst of the coronavirus crash, that bond yield cushion isn’t there. Typically to help the economy, the Federal Reserve can lower interest rates, which was easy when they were at 7%, today there is not much room left. The 60/40 Wall Street Myth of Stability can be devastating to your retirement.

All too often, we talk to prospects who come to us shocked that they have lost so much money. They were convinced that their advisors had been managing their money well. Especially after the stock market returned 31% in 2019. But the truth is usually unveiled during vicious crashes, like that of Covid-19.

When we look at their portfolios, it blows our minds how frequently they are 60/40 or the majority of the time, even more aggressive. This was due to two things, either the advisor was negligent and failed to rebalance, or the advisor was greedy when times are good. They allowed the 60/40 allocation to become 70/30 or even 80/20! No wonder they lost so much money.

Many of the biggest pensions and investment firms use a 60% stock/40% bond asset allocation, in part because it is considered more stable than ones more heavily weighted in stocks but also more lucrative than ones leaning more toward bonds.

No wonder Wall Street uses this as a cookie-cutter formula to sell high and ultra-high net worth investors on this model. However, if we un-peel the onion further, it is also true that from Oct 2007 (the start of the last economic crisis) through March 2009 (when we saw a bottom), a 60/40 portfolio lost about 33%. EVENTUALLY, it took this 60/40 model 603 days to recover back to even.

Whether it is to control your cash flow by maintaining a good credit score of your credit cards. Buying investment products that suit your assets or providing retirement planning.

As a high net worth individual, you may hear about other wealth management firms besides Pillar WM. You may think of why you should stick with Pillar Wealth Management for something crucial, like managing your investable assets. At Pillar WM, we believed that every financial case of high net worth and ultra high net worth families is unique. Hence, each one needs a different approach. When it comes to other wealth management firms, you will not get this because they will create a generalized financial plan and provide the same financial service to all of their clients.

This is the thing that separates us from other firms. You will get a personalized wealth management strategy based on your financial circumstances, which is necessary because every person has different financial goals.

Deciding to assign a financial advisor or wealth management firm to manage your assets will give you several advantages. In comparison, when you assign an IT expert to work on your business website, they will assess every element on your site, such as understanding audience insights, implementing content measurement, assessing product development, and so forth. Financial advisors work the same way with their clients.

Pillar Wealth Management is a fee-only firm with a fiduciary standard and provides financial planning, wealth management, estate planning, investment management, retirement planning, and many other financial advisory services. Hutch Ashoo and Chris Snyder are experts in the financial advice service industry. They serve high net worth families across the country and help them reach their financial objectives.

From our experience, we know exactly what high net worth and ultra high net worth families need, and you would benefit if you had an advisor that can understand your financial situation comprehensively and have your best interest at heart. Pillar Wealth Management is the firm that you need if you want to have a sophisticated and trusted wealth management service. Please do not wait any longer, and start your free consultation with us today.

To be 100% transparent, we published this page to help filter through the mass influx of prospects, who come to us through our website and referrals, to gain only a handful of the right types of new clients who wish to engage us.

We enjoy working with high net worth and ultra-high net worth investors and families who want what we call financial serenity – the feeling that comes when you know your finances and the lifestyle you desire have been secured for life, and that you don’t have to do any of the work to manage and maintain it because you hired a trusted advisor to take care of everything.

You see, our goal is to only accept 17 new clients this year. Clients who have from $5 million to $500 million in liquid investable assets to entrust us with on a 100% fee basis. No commissions and no products for sale.