5 Guesses About What Happened to Baby Jessica’s Trust Fund

5 Guesses About What Happened to Baby Jessica’s Trust Fund

5 Speculations on What Happened to Famous Child’s Trust Fund

If you’re old enough, you may remember back in 1987 when an 18-month old toddler named Jessica fell down an 8-inch diameter well in Texas. For 58 hours, viewers waited in breathless suspense to see if rescuers would be able to dig down a parallel shaft and pull her out in time.

They called her ‘Baby Jessica,’ and her story drew worldwide attention. Even before the internet. Her ordeal also resulted in many people donating money to help her. This money was put in a trust fund that she would be able to access at age 25. That happened in 2010 or 2011.

What happened to this money? How well has it performed as an investment? The answer offers a warning to any high net worth individual or family who thinks a few million in the bank makes them financially secure.

According to this article,  most of the $1.2 million is now gone. Much of it was apparently lost in the 2008 crash – notably before Jessica herself had any access to it. Much of what remained allowed her family to purchase their home.

But because so much of the money was apparently lost before Jessica could even access it, this story offers a unique example of lost wealth. Usually these stories center on irresponsible celebrities or people who get rich too fast and then blow it all.

But this story is different. Here, significant amounts of money were lost before the beneficiary even got to see it.

What Happened to the $1.2 Million Trust Fund?

For the record, we have no access to Jessica’s financial statements, advisors, or anyone else in her life, so our analysis is based purely on what could be gleaned from what Jessica reveals in her story. This is complete speculation. But let’s consider these facts:

$1.2 million dollars sat in a trust fund. It’s not clear from the article if $1.2 million was the starting amount back in 1987 or if that was the peak value before the crash. But either way, consider what might have happened to this money before Jessica could access it, all things being equal.

First, with Black Monday occurring just five days after her ordeal, Jessica’s trust fund should have experienced some strong growth for its first few years. Then, the 1991 recession probably sunk some of its value. Next, it should have ballooned during the 1990s boom years, and then probably fallen again in the dotcom crash.

This was likely followed by middling growth for a while, culminating in the huge crash of 2008. By the time she got access to it in 2010 or 2011, some of those losses would have been recovered, but it’s hard to say how much.

However, consider this graph. It shows the market performance data for the DOW (blue) and the NASDAQ (orange) from 1985 to 2010. 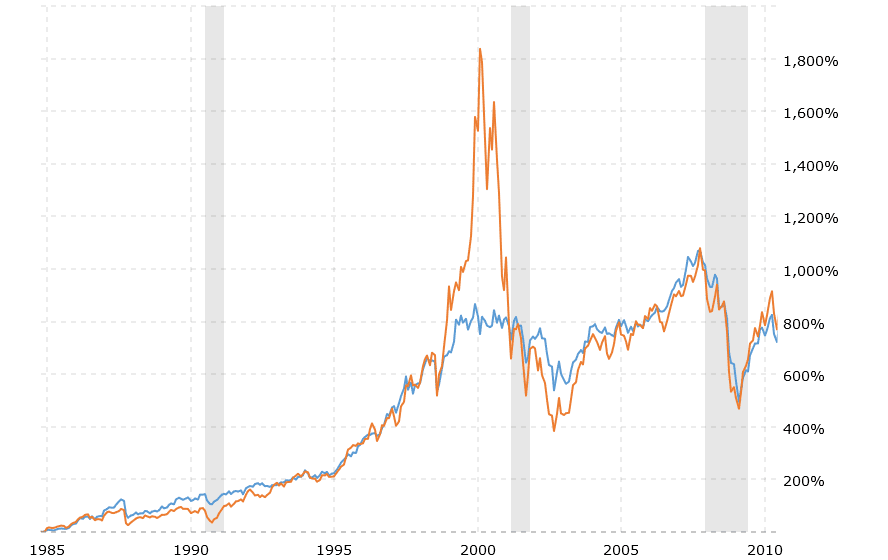 You can see the Black Monday crash point between 1985 and 1990. Sometime after that is when Baby Jessica’s trust fund would have been established.

Even with the huge meltdowns from the two major recessions and the minor one in 1991, look how much higher the graph is – even at the low point of the Great Recession in 2008 – compared to 1987.

So the question is, even with these recessions, how could so much of Jessica’s money have been lost? The most probable answer is (again – we do not have any access to the real data – this is assumptive speculation), her money was poorly invested.

If, over a 20-year period, your financial advisor cannot take $1.2 million and turn it into much more than that, even if a couple major recessions take place in that time, you have a very poor financial advisor.

How might Jessica’s trust fund have been mismanaged? Here are a few possibilities:

One possibility is that Jessica’s money was invested too heavily in one or two sectors. For instance, if whoever managed her trust fund invested all of it in an index fund that tracked with the NASDAQ (the orange line in the graph), she would have lost most of her gains in 1991, then made a ton of money up until 2000, but then lost almost all of it again shortly thereafter. And in 2008, she would have once again ended up where she was in 2001.

If Jessica’s trust fund managers allocated her money in a high risk portfolio, they would have done very well in the 90s. But their investment performance would have been terrible most of the rest of the time.

A well-crafted investment plan must balance risk with performance. You can learn much more about this in our free ebook – Outstanding Portfolio Performance – The Shifts To Financial Security And Serenity For Successful Multi-Millionaires. Get your free copy here.

From our perspective, this high-risk scenario is the most likely explanation for what happened to Jessica’s trust fund. We believe this only because it is a pervasive problem across the financial advisory industry.

So many advisors recommend high-risk investment plans for their clients that lead to disastrous under-performance. Many of these beleaguered high net worth investors come to us and show us what their advisors have done.

It’s not uncommon to see portfolios with 100% of the investments in stocks. That’s high-risk. If that’s you, and if you and the next recession were to square off in a boxing ring, I know who I’d put my money on. And it wouldn’t be you.

We scratch our heads in astonishment every time we see this. That someone would take this course of action with money someone else entrusted them with is beyond comprehension for an independent fiduciary advisor.

This money funds their current and future lifestyle, retirement goals, estate plans, philanthropic plans, travel plans, and so much more. It’s astonishing that Jessica’s trust fund didn’t have at least double its value in 2010-2011 when she gained access to it, even considering the recession. Astonishing.

An advisor who just sets your investment plan on autopilot and doesn’t continually adjust it over time will cost you millions over the life of your portfolio. We don’t know if this happened to Jessica’s trust fund, but if whoever was managing it wasn’t actually managing it, but just let it sit there and fend for itself, you can bet its performance greatly underachieved.

Why would this be true?

Because a lot changed during that 20-year period. Think about it. In 1987, there was no internet. No cell phones. No social media. No Amazon. No Netflix. Cybersecurity wasn’t even a word. By 2010, the world looked very, very different.

Companies that dominated in 1987, like Sears and Kmart, were in freefall by 2010. If Jessica’s trust fund didn’t adapt to the monumental changes of the last 20 years, her performance would have suffered great and needless losses.

And these losses would have been compounded in the three recessions to levels much more severe than they should have been. A wealth manager who neglects your portfolio will cost you millions.

This is a constantly moving industry. You need a manager who constantly adjusts your portfolio. Because for you, the changing markets and trends are only half the story. You’re changing too!

Your life, your goals, your priorities, your family situation, your medical situation, retirement, travel, extended family, business goals – all this continually changes. What you care about now has little in common with what you’ll care about in 20 years.

Your portfolio must be continually adjusted, or its performance will suffer. This is true no matter who the advisor is. Even if Warren Buffett created your initial portfolio, it would be stinking ten years later if no one touched it during that time.

Pillar Wealth Management’s approach includes quarterly adjustments and updates to every single client’s plans. We monitor your goals, update them as your life changes, and continually adjust your investment plan accordingly.

Your long term financial performance and achievement of your lifestyle goals will always be optimized and updated.

In Jessica’s case, were her trust fund’s managers talking to her parents when she was still a kid? Were they talking to her as a teenager and young adult?

In 2004, Jessica would have been 18, graduating high school. That seems like a good time for her trust fund managers to call her up and talk about her goals. Is she going to college? Does she have a career goal? Does she have a plan to pay for this?

If not, how much of her trust fund might be needed to pay off any debt she incurs? Or, perhaps there might be a way to access the funds early for college expenses. Again – we don’t have any information about what really happened.

We’re using this exercise purely as an object lesson, based on her own words that the money is mostly gone. But if the managers of her fund were doing their job, which includes staying in communication with their client, they would have been talking about this.

With a large expense like college looming, Jessica would need a large portion of this money as soon as it became available. So, that portion of her trust fund should not be invested in high risk investments.

Likewise, a similar change should have happened when she got married and had kids. Her kids are now 7 and 9 – therefore they were born around the time she got access to the trust fund.

Her objectives for large portions of the trust fund were therefore not for long term goals. They involved college, marriage, buying a home, and kids – all within ten years of graduating high school. Her financial advisor could have helped her begin planning for these key life events  in 2004 at age 18.

So what happened? We’ll probably never know. But it’s a pretty safe assumption that there wasn’t a whole lot of dialogue happening, when in reality there should have been frequent and ongoing discussions about her changing goals and lifestyle needs.

There is also the possibility that Jessica had no financial advisor at all, ever. This would be like neglect on steroids. If no one was actively managing Jessica’s trust fund for all these years, that would mean it was just sitting there, on autopilot for 20 years, and not looked at by anyone.

Perhaps the bank or money management firm that was holding it sent her statements now and then. But if no one was assigned to her trust fund, and no one was helping her maximize its performance, that would mean she would have no one to turn to even if she did have questions.

If this is the case, then what a tragedy. Certainly not as terrible as being trapped in a well when you’re 18 months old. But still – the money is mostly gone now. She has two kids.

They get no benefit from a sizable amount of money that, had it been properly managed during the 20-year period before Jessica could access it, would now be providing them with the opportunity to attend the colleges of their choice and perhaps even buy their first homes.

And, Jessica and her husband could have used it to secure their own retirement, even though it’s still many years off.

Mostly, this was just a fun exercise. Jessica herself says she’s happy to be alive and enjoys her life as it is. And it’s a great story, to see what someone’s life becomes after such a harrowing experience as a baby.

But make no mistake about the most essential lesson for all high net worth investors.

Without an engaged, attentive, data-driven, experienced wealth manager, you too could end up losing huge portions of your investment portfolio at the worst possible time. You too could see little to no growth.

In reality, you should see strong and consistent growth, always moving forward toward the nearly certain achievement of your short and long term financial and lifestyle goals.

That’s what you should be getting from your financial advisor. If you’re getting anything less, you need a new one.  Set up a quick 15-minute chat with a Pillar Wealth Manager Expert