Since you found this article, it means you probably think outperforming the market is both a worthy goal and perhaps even an achievable goal. You may or may not be convinced that it’s possible to consistently outperform the market, but you think it’s worth shooting for.

Here’s the bubble-burster: There is no guide, system, or secret strategy to outperforming the market. No one knows the future, with apologies to the crystal ball industry. (Shouldn’t their stock at least be always going up?)

Even more, how to beat the market is the wrong question, as you’ll see in a bit.

But since you’re here, let’s talk about what it means to beat the “market.” The first question is, what is the market?

What Is The “Market”?

Further, when you add in the hundreds of thousands of companies in other countries, and other sectors like bonds, real estate, and commodities, the idea of there being a single “market” is pretty anachronistic.

So too is the idea of outperforming it. How can you beat something that you can’t even define?

Experts Contradict Each Other – On the Same Page

A recent finance news page featured these two headlines right next to each other:

Right next to those, another headline said the market was going back down after a big upswing. And yet another one quoted a Wall Street firm that declared a “strong case” for gold over bonds and stocks.

So is it going up or down? Should we ditch the market and jump back into gold? What about hedge funds? Hedge fund traders are pretty smart guys, right? One hedge fund lost 42.1% in 2018. Others lost 10 – 20% and more, far more than the indexes in what was a down year for many. Maybe they’re not so smart as we think.

The notion that you can beat the market if you just find that one really smart manager is a myth that has fueled a financial industry that doesn’t even know why it pays its own managers what it pays them.

One Bloomberg synthesis of multiple studies on money manager compensation concluded that “mutual-fund managers are paid less for beating the market than for marketing — i.e., the ability to collect assets.”

When they do well, they attract more investors and thus more fees. But then, when those same fund managers do poorly, the investors flee. So it’s not about making money for you. It’s about raising their star rating so more people join their fund, which means more money… for them.

And that behavior reveals another reason why outperforming the market eludes the great majority of investors:

Emotions Continue to Dominate Our Actions, Despite Concerted Efforts to Suppress Them

Emotions are like the rebels in Star Wars. No matter how many rebels the Empire kills, there always seem to be more, with all the required infrastructure always in place to support them.

When mutual funds do well, more people put their assets into the fund. When the funds do poorly, more people depart. This is purely emotional behavior, based on almost zero logic, data, or reason. And how does this behavior relate to the future performance of the fund? What if it turns out funds grow more when investors leave, and grow less after they join in?

Are people riding the wave up, or are they jumping in after the storm has passed?

All the data you find on this topic says the same thing: People do not do what is in their left-brain best interests. They buy high and sell low. They are driven by emotion, even though all the data pleads and begs them to not do so. We like to pretend we’re logical, analytical, objective, and free of bias. The reality shows something quite different. And this is true with more than just money.

You will very likely not outperform the market, because you are human. Your emotions will get in the way – with very rare exception.

But What About Those Experts Who HAVE Outperformed the Market?

Peter Lynch is one of a handful of investors credited with outperforming the market over a long stretch of time. The Simple Dollar gave four reasons why this happens,  and why these people aren’t as easy to find or replicate as we want them to be.

One reason is that they work really, really hard at it, sometimes for far more hours than any normal person can afford.

But the most noteworthy reason given: You only hear about the winners because they had some luck on their side.

Go look at some of the companies Lynch invested in back in the 1980s. He didn’t know those companies would grow the way they did. He obviously had an idea they might do well – but isn’t that what every active manager tries to do? They do their research, find equities, bonds, or commodities they think are going to grow, and invest money in them.

The simple fact is, some of them just get luckier. Did anyone know back in 1999 that Amazon would become what it has? No. No one knew. Some people bet on the potential enough to stick with them, and it paid off. But how many of those very same people invested in Aereo?

Some gambles – which is what these really are – pay off, and some don’t. That is ultimately the nature of the stock market. And just like in Vegas, the house always wins.

What is the “house” in this case?

Who Really Wins When You Try to Outperform the Market

Warren Buffett famously estimated that wealthy people who followed the advice of Wall Street wasted over $100 billion from 2007 to 2017.

Where did all this money go? It went in the form of fees and costs paid to active money managers.

When you try to outperform the market, what you’re really doing is enriching active money managers, hedge-fund managers, and big investment firms. And in most cases, you’re also paying a lot more in taxes and other expenses. But that’s a discussion for another day.

Yale endowment fund manager David Swensen grew Yale’s fund from $1 billion in 1985 to $22.9 billion in 2008, astonishing growth that included 20 consecutive years of sustained increase. He knows a few things, it would seem.

Here’s what Swensen had to say about Wall Street:

“The mutual fund industry is not an investment management industry. It’s a marketing industry.”

He went much further than that in the same interview, putting the finger on why trying to outperform the market using Wall Street’s advice is a losing proposition:

“There’s an irreconcilable conflict in the mutual fund industry between the profit motive and fiduciary responsibility….The investor is bombarded with staggering amounts of information, staggering amounts of stimuli that are designed to get the investor to buy and sell and trade, to do exactly the wrong thing, to create excessive profits for these intermediaries that aren’t acting in the investor’s best interests.”

When you’re out there buying, selling, trading, and freaking out when the market goes haywire, what are these conflict-of-interest prone intermediaries doing?

The Motley Fool reports that if you go all the way back to the birth of market data in 1871, there have only been six years where the market produced returns between 8% and 11%. Six, out of 146.

What does that tell you? That the market is volatile. And you will have periods where you lose more than you gain. But your active money manager who’s out there trading, buying, selling, triggering taxable events, making gains for you that get taxed at 30% – that manager wins year after year, as long as you keep entrusting your money to him.

The most credible wealth managers are those who have earned strong returns and yet criticize their own industry. That means they know how to succeed, but also understand why hardly anyone does.

Is There No Way to Outperform the Market Then?

Swensen has a funny line about this. He says, “The approach that I recommend is going to give you absolutely nothing to talk about at a cocktail party. You’re going to be in a corner by yourself, and no one will pay any attention to you. But you’ll end up with a better-funded retirement.”

So you can be boring but have more money. Or, you can be the life of the party, as long as someone else is paying for it.

Notice though, that the goal even for Swensen isn’t to “beat” the market. Again, what market? The goal is to simply maximize returns in the pursuit of your goals. Swenson’s goal is to grow Yale’s endowment so they can help more students attend.

Can you outperform the market? It’s the wrong question.

The right question is – do you have any idea what you want to do with your money? And once you’ve defined that, what will it take to make sure you succeed in doing what you want?

You don’t need a money manager to do this. You need a wealth manager. There’s a HUGE difference.

Get The Ultimate Guide to Choosing the Best Financial Advisor for Investors with $1 Million to $70 Million Liquid Assets, and discover what can go wrong when you choose the wrong person to entrust with your future. 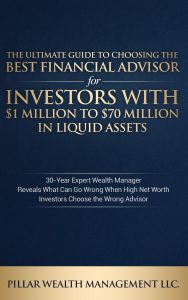